skip to page content
Attention A T users. To access the combo box on this page please perform the following steps. 1. Press the alt key and then the down arrow. 2. Use the up and down arrows to navigate this combo box. 3. Press enter on the item you wish to view. This will take you to the page listed.
Menu
Menu

VA manages more than 1,700 historic properties, ranging from national cemetery monuments to staff quarters to designed landscapes. These photographs highlight several of the important features, themes, and periods in VA history. Click on an image or title to see a larger format photograph.

National Cemeteries, first established during the Civil War, have many unique features, including gates, superintendents' lodges, and rostrums. The first facilities for veterans, known as the National Home for Disabled Volunteer Soldiers developed Post Civil War to care for veterans who could not care for themselves. This system grew to include 11 branches. Following World War I, new facilities were built to care for veterans returning from Europe with medical resulting from warfare technologies. World War II led to the creation of much larger hospitals. 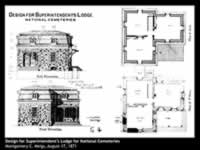 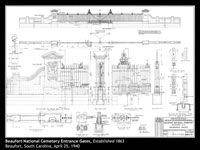 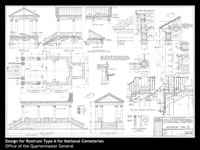 Rostrum
A rostrum is a platform or stage for public speaking. Starting as early as 1882, rostrums were built in national cemeteries so people could give commemorative speeches at the cemeteries on Memorial Day and other days of remembrance. The Office of the Quartermaster General developed a series of classical revival style prototypes for the national cemetery rostrums in the 1930's and 40's. The design shown here was used from 1938 to 1941. 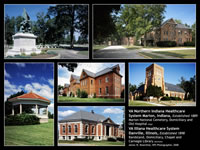 Danville and Marion
Both the VA Northern Indiana Health Care System - Marion Campus and the VA Illiana Health Care System both started as branches of the National Home for Disabled Volunteer Soldiers after the Civil War to care for Union veterans. The branches provided all the daily needs of the veterans including food, housing, and recreation. Campuses contained bandstands for concerts, libraries for reading, and churches for religious observation. 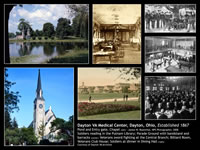 Dayton
The Central Branch of the National Home for Disabled Volunteer Soldiers, now the Dayton VA Medical Center, provided a wide variety of entertainment options for veterans. The billiards room and library provided indoor recreation while the landscaped campus gave veterans the opportunity to connect with nature and enjoy outdoor activities such as boating and walking in the gardens. The chapel is one of the first federally built chapels in the country. Constructed in 1870, the chapel was used for both Protestant and Catholic services until the separate Catholic chapel opened in 1898. 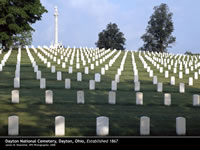 Dayton National Cemetery
The Dayton National Cemetery was established in 1867 to bury veterans who passed away while at the Central Branch of the National Home for Disabled Volunteer Soldiers, now the Dayton VA Medical Center. The Dayton Soldiers Monument, completed in 1877, represents "private soldier of the Volunteer Army of the Republic." The four statues at the base of the monument represent the "four arms of service," which are shown by a sailor, artilleryman, cavalryman, and a bugler (infantry).

Hot Springs
Established in 1907, the Battle Mountain Sanitarium provided short term care to Civil War veterans with lung and respiratory conditions. Now the VA Black Hills Healthcare System, Hot Springs campus, the campus has much of its original historic integrity. The administration building and staff quarters retain their original functions. In 1915, the construction of 204 pink sandstone stairs, referred to as the Grand Staircase, connected the resort district of Hot Springs to the Battle Mountain Sanitarium. 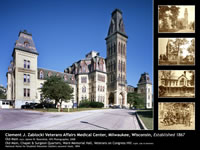 Milwaukee
"Old Main" at the Clement J. Zablocki Veterans Affairs Medical Center in Milwaukee, Wisconsin, was one of the first buildings built at the Northwestern branch of the National Home for Disabled Volunteer Soldiers. Constructed between 1867 and 1869, Old Main housed all the functions of the Northwestern Branch, including dormitories, administrative offices, and residential support facilities. 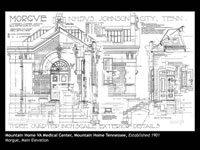 Morgue
The morgue at the VA Medical Center Mountain Home was built in 1903, just two years after the Mountain Home branch of the National Home for Disabled Volunteer Soldiers opened. The VA has rehabilitated the morgue to serve as the emergency decontamination facility for the medical center. 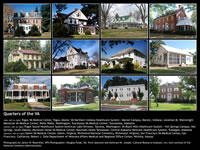 Staff Quarters
VA Medical Center employees were required to live on-site until the mid-20th Century. As a result, many campuses have quarters which are now considered historic. National cemetery superintendents also lived on site. Over 100 VA medical centers and national cemeteries retain staff quarters on site, many of which have been adapted to new uses. Some VA Medical Center employees still live in these houses. 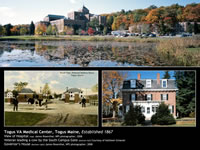 Togus
Togus VA Medical Center was the first National Home for Disabled Volunteer Soldiers branch to open. The 1867 campus remains an active VA Medical Center with some of the original buildings still standing, such as the 1869 Governor's Quarters. Much of the designed landscape at the campus still remains as well. The hospital, built in 1933, provided more room at the facility to accommodate World War I veterans. 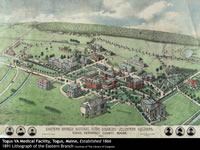 Togus Lithograph
The 1891 lithograph of the Togus VA Medical Center shows the original pastoral nature of the facility. The National Home for Disabled Volunteer Soldiers branches, were carefully designed and landscaped to provide a home-like setting for veterans. The campus provided everything for the veterans, from housing and food to medical care and recreational facilities. Recreational options included boating and fishing on the lake and reading books and newspapers at the library. These self-sustaining campuses provided a home to the Civil War veterans who could not support themselves after the war. 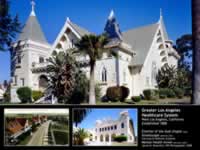 West LA
The Greater Los Angeles Health Care System in West Los Angeles, California was established in 1888 as the Pacific Branch of the National Home for Disabled Volunteer Soldiers. The campus design accommodates the warm climate of Los Angeles and reflects the Spanish stylistic influence. The 1900 Shingle style dual chapel houses two separate sanctuaries for Catholic and Protestant congregations: they have separate entrances and interiors that are decorated according to denominational customs. 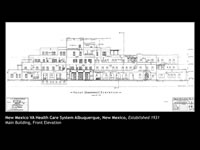 Albuquerque
Established in 1931, the Albuquerque VA Health Care System was constructed in the Pueblo Revival style. Following World War I, the Federal Government built additional facilities to accommodate returning veterans. Using standardized plans to increase the efficiency, more than 70 new hospitals were constructed across the country between 1918 and 1940. While the interior plans for the new hospitals remained consistent, regional architectural style were used on the exterior of the buildings. 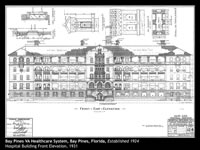 Bay Pines
Bay Pines VA Health Care System, built in 1931, follows the standard "H" plan of the interwar VA facilities. The floor plan is the same as others built during this time, but the Spanish Colonial architectural style of the façade reflects regional style in Florida. 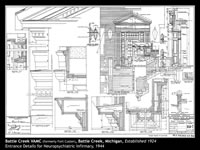 Fort Custer
Located next to a former army instillation of the same name, Fort Custer VA Medical Center was established in 1924 to provide medical care for returning World War I Veterans. The facility was renamed Battle Creek for the name of the town in which it is located in Michigan. The 1944 Neuropsychiatric Infirmary was built to accommodate World War I veterans as well as World War II veterans returning from Europe and Asia. 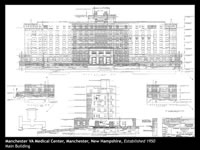 Manchester
Following World War II, the VA embarked on a new building campaign to accommodate the influx of veterans from the war. The "Bradley 500" hospitals were named for the new VA director Omar Bradley and the number of beds in the new type of hospital. The VA opened the hospital in Manchester, New Hampshire in 1950.